1. Hear what God the Lord has spoken
"O my people, faint and few
Comfortless, afflicted, broken
Fair abodes I build for you
Thorns of heartfelt tribulation
Shall no more perplex your ways
You shall name your walls Salvation
And your gates shall all be Praise"

2. There, like streams that feed the garden
Pleasures without end shall flow
For the Lord, your faith rewarding
All His bounty shall bestow
Still in undisturbed possession
Peace and righteousness shall reign
Never shall you feel oppression
Nor hear the voice of war again

3. See no more your sun's descending
Waning moons no more shall be
But your griefs forever ending
Find eternal noon in me
God shall rise, and shining o'er you
Change to day the gloom of night
He, the Lord, shall be your glory
God, your Everlasting Light

The sun shall be no more your light by day,
nor for brightness shall the moon give you light;
but the Lord will be your everlasting light,
and your God will be your glory. (Isaiah 60:19)

This hymn comes from the Olney Hymns, first published in 1779, although some of the hymns had appeared in print previously. It was written by William Cowper, and is one of the 66 he contributed to the hymnal. (Although 67 hymns are marked “C” in the first edition of Olney, Cowper tells us in a letter that only 66 were actually written by him and hymnologists still don’t know which one was marked incorrectly.)

The hymn is based on the beautiful prophecy of Isaiah 60:15-20, spoken to God’s people in exile. Isaiah foresees the New Jerusalem, even while God’s people are in the midst of exile, and the apostle John picks up on this vision in Revelation as well. It is a great example of the fact that faith sees more, not less. Many think of faith as shutting your eyes to reality, being able to block out sadness and trouble. In fact, true faith sees beyond what we are experiencing right now, and sees the glorious future God has promised. (To quote a hymn from our previous project, it is seeing that what we see now is real, but not ultimate. Faith sees the “joy beyond the sorrow.”)

Cowper's hymns excel at powerful, visceral images, and this one is no exception. JR Watson (in his fabulous, though sadly out of print book The English Hymn) points out that John Newton’s hymns in the Olney Hymns often feel more like those written by a preacher, while Cowper’s hymns feel like they are written by a fellow struggler, and that is true of this hymn. In verse one, Cowper captures our typical experience by addressing us as a people faint and few; comfortless, afflicted, broken. He depicts God’s people as perplexed and filled with thorns of heartfelt tribulation. But we must hear what “God, the Lord” has spoken: He will build us a new beautiful city, whose walls will be called salvation and whose gates will be called praise, where we will dwell one day.

In verse two, the imagery shifts from a city to a flourishing garden. Cowper was a renowned gardener, and you can actually still visit his garden at the Cowper-Newton Museum in Olney, England. (For those who want to learn more about Cowper I suggest George Ella’s books, as well as the older biography by Thomas Wright.) Cowper has long been a favorite hymn writer of mine. In fact, I my wife and I named our oldest son Cooper McCheyne (Cowper is pronounced like we would say Cooper) after the poet, and I am actually writing this on my son’s 16th birthday! As you may know, William Cowper struggled with serious suicidal depression and doubts about his relationship with God, and these themes make some appearances in his hymns. But confidence in the promises of God is an even more prevalent theme, and this hymn speaks powerfully to this confidence.

In verse three, Cowper takes confidence in the hope that God will rise as an endless sun, and put our griefs to a “forever end.” I love the way he works with images of change and unchanging eternity in this last verse. Today we still live in the gloom of night, but true daylight is coming. He builds to a glorious crescendo of hope in the final lines:

God shall rise, and shining o'er you / Change to day the gloom of night
He, the Lord, shall be your glory / God, your Everlasting Light

Justin Smith set this text to music and I love the bluegrass feel. Bluegrass has a wonderful way of expressing both trials and tribulation, along with joy and hope. Singing on this one are two members of a group from Belmont University called The Orchardist and if you enjoy this hymn I think you will enjoy their music as well. (Several members of the band have been involved with Belmont RUF.) I am so glad that Buddy Greene was able to add his fabulous talents to this track, and that Drew Michael Blake (who has sometimes played bass for the Indelible Grace touring band) could help out on this one as well. 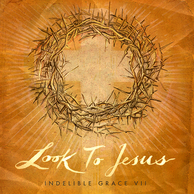